The 1970s is definitely one of the most significant decades in the history of humankind. Just jotting down all the historical events of this age will take a long time. But among all the other noteworthy things, this decade is also famous for giving us some of the most impressive vehicles of all time. Thanks to their incredible horsepower under the hood, they are often referred to as muscle cars of the 70s.

In this post, I am listing five of these muscle cars from the roaring 70s!

This is perhaps the best choice to start the list. The Boss 302 may not be the most powerful Mustang of its day, but it was definitely one of the best cars around. The 5.0-liter V8 motor developing 290 hp was a proper hero of the working class. The massive engine was just one of the many features that were significantly underrated. Even now, the Boss 302 remains as an iconic Mustang throughout any generation. 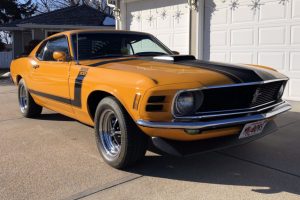 This is a big and bulky Oldsmobile, but it was nothing less than a monster on the street. It had a 4.55 litre V8 motor that was able to push out 365 hp there was enough torque to create an earthquake. On top of that, the W30 package could be used to bring in an additional 5 hp. It also came with the option of going for a four-speed manual, which allowed the 442 could to eat up quarter-mile strips at lightning fast pace.

This is often considered as the pinnacle of muscle cars during the classic period! It has a rather unassuming 450 hp coming from its 4.54 litre V8 in LS6 trim, which was the top dog in the list. The only objective of this vehicle was to be the first across a straight line. It had the option of a four-speed manual or three-speed automatic. All these meant that the SS 454 was one of the quickest stock cars in 1970.

This vehicle has achieved a cult status due to various reasons like 1971 being the last year for the iconic 426 Hemi engine. There were only 11 of these convertibles which came out this year. As a result, they are extremely rare, astoundingly fast, and utterly gorgeous to look at. As a result of being a rare example, the most recent example went for $3.5 million at an auction.

This is an iconic American car of its era as it came out after the oil crisis in 1973. The introduction of emission regulations were also around the corner in a huge way. This meant the 6.6-liter V8 in this vehicle was only good enough for 290 horsepower – even in the top trim. Even then, there was sufficient power to keep this car ahead of any other rival on the street. This was one of the top choices for Americans looking for a V8 since the Mustang II was introduced in 1974 without a V8.